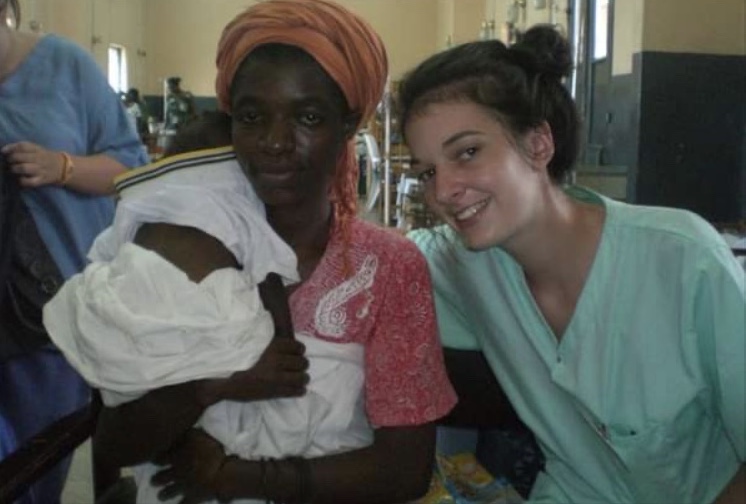 Jemma Berwick, a former University of Salford nursing student, travelled to Ghana in her second year of studying, as part […]

Jemma Berwick, a former University of Salford nursing student, travelled to Ghana in her second year of studying, as part of her diploma.

Since then, she has worked as a cardiac nurse at Great Ormond Street Hospital and pursued her passion for tropical nursing in Malawi.

What made you want to study nursing?

“I’ve always felt like nursing is more of a passion than a job. You’re just built for it.

“It’s something I was naturally drawn towards and I felt it fitted with my personality. It felt like a natural calling.”

You studied for your nursing diploma at the University of Salford – what attracted you to Salford?

“I was after some change, but not too much. I’m from London and I was keen to experience a new city.

“The university had really great reviews and they offered the Children’s Nursing Diploma. The city itself was cool and the school was highly recognised, which was important to me too. “

“Apart from all the fun I had and the great people I met, I actually struggled academically if I’m honest. I was always more of a do-er and an explorer rather than sitting down and writing, so I did struggle with the academic side of my course.

“But I found the practical side easy. I absolutely loved placements. I enjoyed learning clinical skills. I just didn’t love writing essays.”

What made you want to go overseas to Ghana as part of your training?

“I often heard about the differences in healthcare in developing countries, so why not jump at the chance to see it for myself.”

“The university allowed us to do it through an organisation called Work the World, why not take the chance to experience something not many others have the opportunity to do. Whilst also being able to travel to a new country!”

And what about your hospital placement – what departments did you spend your time in?

Can you remember what the day-to-day was like in the hospital?

“I’d spend time getting to know the nurses and the Ghanaian student nurses to see what they did and how their training differed to ours.

“It was challenging at first to see a different way of nursing because I was young and so used to the NHS way of doing things, but it was important to accept that people do things differently.

“It was really important that we had a good work-life balance. We would talk about what had happened during the day at the hospital and chat about the different ways of coping.”

Did you face any challenging situations while you were there?

“The death rate was hard to accept for me. In Ghana they just don’t have the equipment to deal with some emergency situations. A child would stop breathing but there wasn’t much that could be done. They would manually resuscitate them, but eventually, it wouldn’t be enough.

“If there was a newborn in Ghana who had stopped breathing in an incubator that doesn’t work – there’s nothing you can do about it. That was hard to accept. That was a big challenge for all of us actually, that particular child.”

How did your University work experience change your approach to the rest of your nursing career?

“From that one experience in Ghana, my whole attitude to nursing has changed. Humanitarian work is my passion now. And it might not have been if I hadn’t been to Ghana.”

What happened once you graduated?

“After I finished my training at Salford, I worked at Great Ormond Street Hospital for three years as a cardiac nurse. Then I took a few months off to travel around Asia and Australia before going back – I worked there for five years in total.

“I then did a diploma in Tropical Nursing in London I was able to learn about all the things I’d seen in Ghana such as malaria, HIV, worms and TB. It was amazing to learn more about the things I witnessed on my placement. It was great to bring it all together, my experience in Ghana really helped.

“I met a friend on the course, and we ended up going out to Malawi together for six months working for a charity out there. We were part of a group of professionals from all over the world working together in a clinic.”

It was great to go back to Africa with all this emotional and practical knowledge that I’d gained from my time in Ghana and my tropical nursing course.”

“I did palliative nursing in the community for a while too whilst I decided what I wanted to do next. I met an organisation who were working out in Uganda focusing on maternal health. So, I went out to Uganda in January last year. But I had to come back to the UK after a few months due to Coronavirus.

“At the moment I’m working in a local general hospital in Devon, on a paediatric ward which is great because it’s good to touch base now and again to keep my skills up.

“My passion is elsewhere, and my drive is humanitarian work. And that all comes from ten years ago!”

So, what are your ambitions for the future?

Do you have any words of encouragement for our current students thinking about undertaking an overseas placement?

“Do it! I think it should be in the curriculum at every university.

“Students shouldn’t be forced to do it, but they should definitely be encouraged to. To go out of their comfort zone and experience things they’ve not experienced before.

“I really think it was the making of me as a nurse.”

Thank you to Work the World for letting us know about Jemma’s amazing story!