A blog about the planned changes at Clifford Whitworth Library

It’s a landscape of old Salford – factory chimneys, terraces and smog. Only a couple of flimsy looking cranes indicate what’s to come. This is the land bordering Peel Park that the recently established University of Salford would use to build its new academic library. Clifford Whitworth, Vice-Chancellor of the University from its establishment in 1967 until 1974 oversaw the construction of the library that is named after him. Note the line of trees on the left of the picture – they reappear in the 1971 photograph of the completed building below and were only felled when the land was cleared for the New Adelphi building in around 2012. 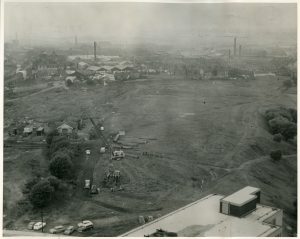 Site of Clifford Whitworth library prior to construction, c1968.

Looking at the exterior of the Clifford Whitworth library today – a mix of three different generations of building work and a plastic cladding programme from the mid-1990s it’s hard to see what its designers had in mind. This is partly due to financial limitations imposed on the project: at its completion in 1971 it was only half the size indicated in the original plans. The architect’s watercolour below (from 1970) indicates the original intended size.

And the photograph below shows the actual size post completion in 1971. 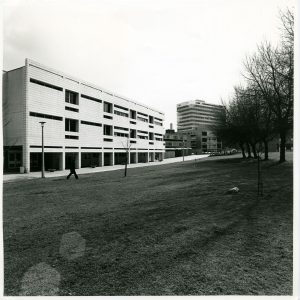 The utilitarian, modernist exterior was matched inside the building with clean lines and simple furniture. Note in the image of the first floor below the open access to the main staircase – since closed in. 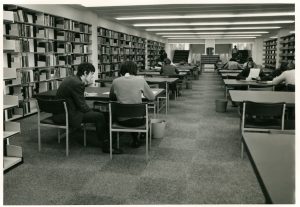 The staff desks followed suit – with the combined book issue / access control desk pictured below in sleek white with a dramatic bank of lighting above. If you look carefully behind the pillars to the rear you’ll see one of two Henry Moore sculptures that the University had on loan at the time. 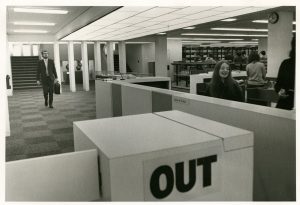 Staff in the back offices – laid out much the same today – were equipped with top of the range IBM Executive electric typewriters and had great hair. 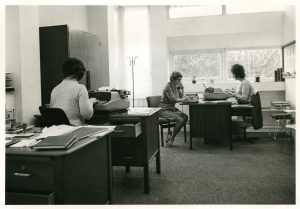 It wasn’t until the late 1980’s that the University was eventually able to extend the library and by then the style of architecture it had exemplified was completely out of fashion. 1989 saw the opening of the yellow brick extension to the north of the existing library. It housed staff offices, conference space, a machine room and new entranceway. The covered walkway visible in the 1971 exterior shots above was filled in and the plain white tiles that created the striking original exterior were covered over with plastic cladding. 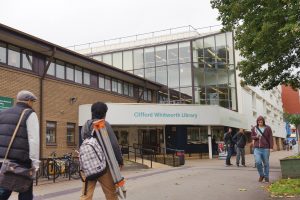 The exterior of Clifford Whitworth in 2012 shows a mix of original features and more recent additions.

If you’re interested you can still see the unclad 1971 white tiles on the rear elevation of the building (overlooking the park) in 2016.
With the creation of the Law school in 2006 the Library gained more space. The law school building (Lady Hale) was built directly to the south of Clifford Whitworth and a bridge connected it to Clifford on the second floor. Initially this was a dedicated law library within the main library, however changes to the use of Lady Hale have meant it is now simply an extension to the library.
The current library Development project is, amongst other things, a bold attempt to provide a consistent look and feel across the different generations of the building – creating a consistent user experience throughout.

2 thoughts on “The Clifford Whitworth building – a brief illustrated history”