Climate change and disruptive technology are two of the biggest challenges facing the construction sector, according to industry experts. 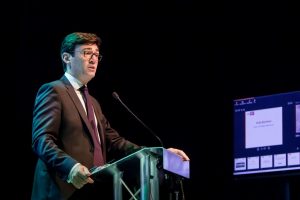 The fourth annual Construction Summit North brought hundreds of high-profile delegates to the University of Salford to hear from some of the biggest names in urban development and the built environment.

The event, organised by the Greater Manchester Chamber of Commerce and Salford Professional Development, covered the major issues affecting construction in the region, including housing, transport and digital infrastructure.

END_OF_DOCUMENT_TOKEN_TO_BE_REPLACED

Does the ‘Digital Society’ Include Rural Areas?

Huge strides have been made in delivering broadband to all parts of the UK, with nearly one in three receiving superfast Broadband.

Ofcom’s strategic review concluded that this improvement has been down to a number of government initiatives, yet 54% of those living in rural areas are not satisfied with the government’s programme to improve broadband in rural areas.

END_OF_DOCUMENT_TOKEN_TO_BE_REPLACED

Last week TalkTalk one of the UKs largest mobile phone and broadband providers, suffered a ‘substantial and severe’ cyber-attack to its website. It comes at a time when cyber security is becoming talked about increasingly, and is now seen as a critical factor for any business with an online presence. In this blog we look at what caused the Cyber-attack at TalkTalk , the company’s response, as well as what this could mean to the online security landscape.

END_OF_DOCUMENT_TOKEN_TO_BE_REPLACED

In the run up to the Digital Housing Conference 2018, we will be sharing some insight about the digital housing landscape and refreshing what we have already learned from previous events.

You can learn about the latest Digital Housing trends for this year’s event here.

Alternatively, you can go straight to the 2018 event page and learn about this year’s speakers here.

This insight is from Property Tectonics, a previous digital housing event sponsor, and was gathered for last year’s Digital Housing conference with a view to showcase the work they do and how their support and services can help improve your company’s digital development.

END_OF_DOCUMENT_TOKEN_TO_BE_REPLACED

An under occupancy charge was brought in as part of the Welfare Reform Act 2012, by the then coalition government. The Act is set out to improve work incentives and cut unnecessary administrative duties. It was hoped simplifying the benefits system would contribute to the deficit reduction, as well as freeing up properties to help families in overcrowded council homes. Shelter report 1 in 4 properties would be deemed as over occupied.

END_OF_DOCUMENT_TOKEN_TO_BE_REPLACED

Sustainable Transport: Have bike lanes in the UK failed ?

Over 43% of people in the UK aged 5+ own, or have access to a bike. This stat is not surprising given the UKs passion for all things cycling. This has been propelled by British Olympic success in the velodrome, during the 2012 home games. Alongside the fact that brits have taken the yellow jersey, 3 times in the last 5 Tour De France events.

END_OF_DOCUMENT_TOKEN_TO_BE_REPLACED

UK threat level is now at severe, an attack is highly likely. The severe threat level came into place last August, having been at a substantial rating since 2010. The level has been brought into question over the last year, as a result of high profile worldwide terrorist attacks. The terrorism threat status has not reached critical since the London Bombings in 2007.

“There is no doubt we face a very severe threat in our country and we have done so for many months and years. “ David Cameron

END_OF_DOCUMENT_TOKEN_TO_BE_REPLACED

On the 6th of August last week more than 300,000 households were warned by United Utilities of a public health risk. All tap water in Blackpool, Flyde, Preston, South Ribble, Wyre, and areas of Blackburn should be boiled before consumption.

Martin Padley, Chief Scientific Officer at United Utilities, said: “The advice is being given purely as a precautionary measure as we carry out additional tests today. We apologise for the inconvenience but the health of our customers is absolutely paramount.”

It has now been confirmed that a contamination had occurred, with the identification of low levels of microbial parasites, known as cryptosporidium in the water system. Cryptosporidium commonly referred to as crypto, is a parasite passed on by accidental ingestion of contaminated faeces. This can cause gastroenteritis, diarrhoea, vomiting, nausea and can have more serious complications for those with weak immune systems.

END_OF_DOCUMENT_TOKEN_TO_BE_REPLACED

Five Reasons Why The Construction Industry Should Embrace BIM

Over the last few years, the construction industry has been revolutionised by the introduction of new technology, helping it to become more efficient in the way it works. BIM, or Building Information Modelling, is the technology aiming to do just that.

Described as a “Game Changer” by UK Government, BIM is a coordinated series of processes set up to make the construction of buildings and infrastructures more efficient, incorporating aspects such as design, planning and creating throughout a project’s life cycle. Sounds complicated? It’s pretty straight forward really and the benefits of the technology will become clear to you; here are five reasons why the construction industry should embrace BIM.