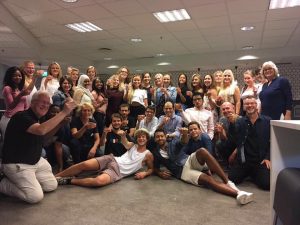 Some of the student participants and tutors at OPTIMAX 2017

This year OPTIMAX, a 3 week residential summer school, was hosted by Oslo and Akershus University College of Applied Sciences, Norway, during July and August 2017. This was the 5th rendition of OPTIMAX and to date 189 students and 65 tutors from 12 countries have participated in it.

The purpose of OPTIMAX is to give radiography students a chance to participate in multinational team-based research. This is consistent with providing a near to real life experience, because quality research is often conducted in multinational teams. Each OPTIMAX team comprises students and tutors and they work together on an equal basis; tutor-student contact is extremely high and tutors spend around 40 hours per week working within their research team. This has significant benefit to the student learning experience as they receive constant feedback and support throughout the entire research process. OPTIMAX commences with the development of effective [research] teams; it then progresses rapidly to doing research about medical imaging. The latter includes formulating and testing methods, gathering and analysing data and finally producing outputs (draft journal paper, physical conference poster and also a PowerPoint presentation which is delivered on the final day in a formal conference). Beyond the conference a book is published in which the research articles become chapters; the abstracts are always submitted to the European Congress of Radiology (Vienna, Austria) and normally they are accepted for presentation. All student participants become authors, which is an important first step in establishing a professional CV. So far 3 books and 14 journal papers have been published and also 29 conference presentations have been delivered (see Appendix I). Another book and 4 conference presentations are planned to arise from this year’s summer school. read more

From 12th-13th July 2016 the second Virtual Social Interaction workshop will be held at MediaCity, Manchester.  Co-organised by University of Salford, Goldsmiths University of London and University College London, the workshop will showcase new methods and theories in social interaction, with talks from 8 international speakers and c. 20 Posters.

Attracting an audience of international researchers from the fields of Psychology, Cognitive Neuroscience Computer Science and Digital Technologies the workshop will highlight work towards a scientific understanding of how people interact.

Early Bird registration ends on 30th May and entry provides access to talks and posters, full catering on both days and an evening wine and poster reception. Register here: http://shop.salford.ac.uk/browse/extra_info.asp?compid=1&modid=1&catid=270&prodvarid=245