Universities must rethink how to keep students safe 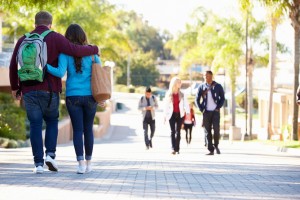 Security at university isn’t just about what happens on campus. Monkey Business Images/www.shutterstock.com

Students may be more at risk of crime and mental ill-health at some universities than others because of differences in the way institutions consider the safety and well-being of their students. Last year, 2.3m students started university in the UK, representing 4% of the population. These students are at greater risk of crime than other people in Britain. Figures from the Office of National Statistics show that 19% of full-time students were victims of crime in 2014-15, compared to 16% of all adults in the general population.

Full-time students experienced higher levels of victimisation than the general population for a number of crimes, including burglary, violence, domestic violence, mugging, robbery and theft. Specific student groups face different issues of personal safety. Recent reports show that women – who make up 56% of new UK university students – are at risk of sexual harassment and assault on university campuses.

We know that international students, who make up 19% of all UK university students, are increasingly concerned about safety. This influences their choice about whether to study in the UK or another country.

But universities need to stop thinking about security purely in terms of “crime on campus” and focus more on the wider pastoral care and well-being of students throughout their university life.

Living away from home for the first time is a big step. Combine this with the pressure of university life such as making new friends, homesickness, financial worries, meeting deadlines and exams – and it is perhaps unsurprising that students are also at greater risk of mental ill health.

One 2004 study involving 250 students found 52% of UK students showed evidence of psychiatric disorder – such as anxiety and severe depression – compared to 30% of the adult population. And a 2015 NUS survey of 1,093 students found that 78% of them experienced mental health issues in the previous year.

Understandably, university counselling services report significant increases in demand as troubled students seek help. But without appropriate support, mental ill-health may result in self-harm or even suicide. As the graph below shows, between 2007 and 2011, 518 full-time students aged over 18 in England and Wales committed suicide, with male students most at risk. Over the same period, annual student suicides rose 50% despite total student numbers only increasing by 14%…