During the course of the summer, two members of Politics and Contemporary History were involved in teaching and lecturing at Nankai University, Tianjin, China. Dr Moritz Pieper presented a research paper at the Zhou Enlai School of Government, while Prof Alaric Searle delivered a four-week course on ‘Classic Works of British Historiography’ to undergraduates in the Faculty of History.

The title of Moritz’s talk was ‘Mapping Eurasia: Comparing the Competing Public Diplomacies of Russia’s “Greater Eurasia” and China’s “Belt and Road”’, which he delivered on 19 June. In his guest lecture, he presented a survey of the public diplomacies of China’s Belt and Road initiative and Russia’s vision of ‘Greater Eurasia’. Despite a level of economic competition between the operating modes of the economic land corridors envisioned under China’s ‘new Silk Road’ initiative and the Russian-dominated Eurasian Economic Union, Moritz argued, a convergence of interests between Russia and China on the global plane might temper the effects of regional rivalry. 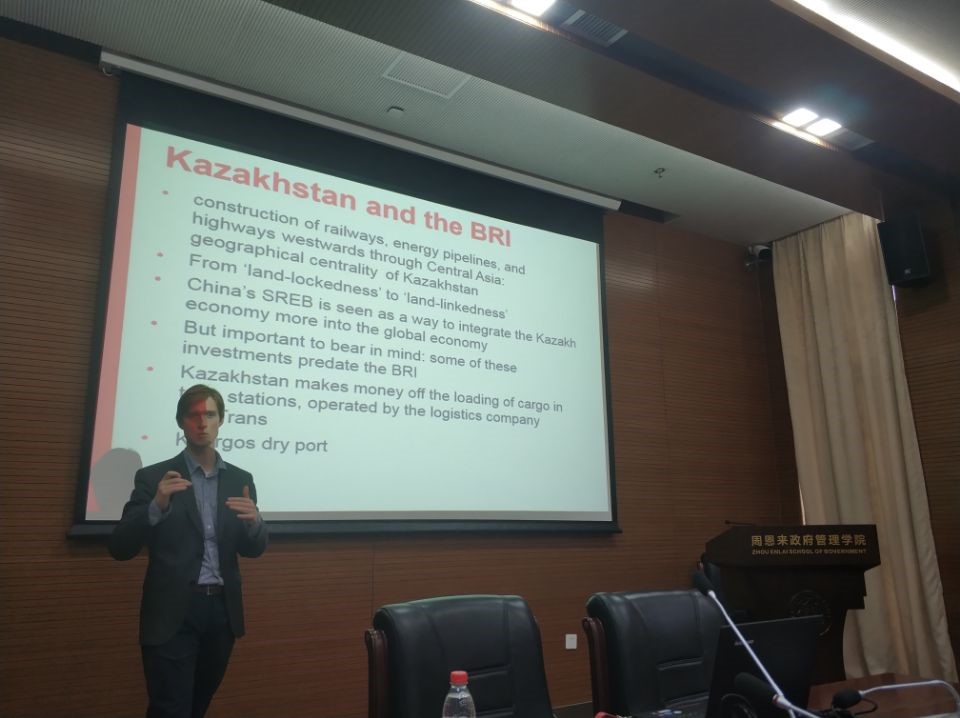 The presentation reflects Moritz’s current research project on the Belt and Road Initiative and its significance for Central Asia, for which he was awarded a Vice-Chancellor’s Early Career Research Scholarship. Students and staff alike engaged in a lively discussion about Central Asia, Trump, and IR afterwards, followed by some Peking duck sampling.

Alaric Searle’s course, which was delivered in the Faculty of History at Nankai during July, was part of his role as Distinguished Visiting Professor, which he has held since June 2016. Alaric noted: ‘It is always interesting to teach in China because students will often have a very different perspective on history. Some parts of British history are, not surprisingly, less well-known to Chinese students, so it is always interesting to try and explain unknown territory to them.’

Professor Searle is also involved in some research collaboration with Chinese historians. On these projects, he commented: ‘There are currently two collaborative projects I am working on with Chinese colleagues. One is nearing completion, while the other is still in its early stage. But, to coin a phrase … watch this space!’