We Sat Down to Stand Up for Farmers and #Fairtrade!

The thin months, the months of the big stomach, the times of silence – these are just some of the ways the farmers behind our breakfast describe the times of the year when they struggle to feed themselves and their families. 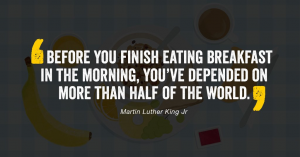 Millions of farmers and workers in developing countries are going hungry, missing meals or, worse, facing a year-round struggle to get enough food to eat, despite working long hours to provide for our breakfasts. This is why this year the Fairtrade Foundation had the theme for Fairtrade Fortnight of Sit Down for Breakfast, Stand Up for Farmers.
Seasonal hunger is common to coffee and cocoa farmers who harvest once or twice a year and have to make the money last until the next harvest. That’s to keep a family fed, clothed, housed, educated and healthy. On banana and tea plantations, poor pay leaves them with hunger throughout the year. Malnourishment, stunting, illness and infant mortality can be brutal realities when there isn’t enough food.

But by choosing Fairtrade, we can support a better deal for farmers and workers. This means they can have more control over their lives when times are hard and do something we take for granted ̶ put enough food on the table for the people they care about, all year round.

We were very pleased to be contacted by the Fairtrade Foundation to host their north west breakfast event to help highlight these issues. We worked with our partners at Salfood and were joined by a particular supporter of Fairtrade, Tony Rodd. 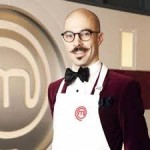 You may recognise Tony as he was a finalist on Masterchef last year and was best known for his amazing desserts and chocolate work! Tony told us that he supports Fairtrade as it’s a great way to enrich farmers’ lives and fantastic quality products and it’s as simple as choosing the product with the Fairtrade logo when you do your weekly shop. A big thank you for Tony for coming up from London to help with our event.

Salfood’s Head Chef Simon Spencer created some fantastic breakfast goodies with Fairtrade products including pancakes and waffles with jams, honey, syrup or chocolate sauce toppings as well as beetroot and chocolate muffins! Also Salfood’s Student Engagement Manager Misbah Haque did a fantastic job organising and creating a beautiful setting for us at our MediaCity campus. We were joined by University and Salford City College students as well as staff, I think everyone had a good time! Thanks also to our photographers Richard Meftah and Stefanos Pallebo and Laura Bailey who filmed the event for Salford Online who really captured the morning! 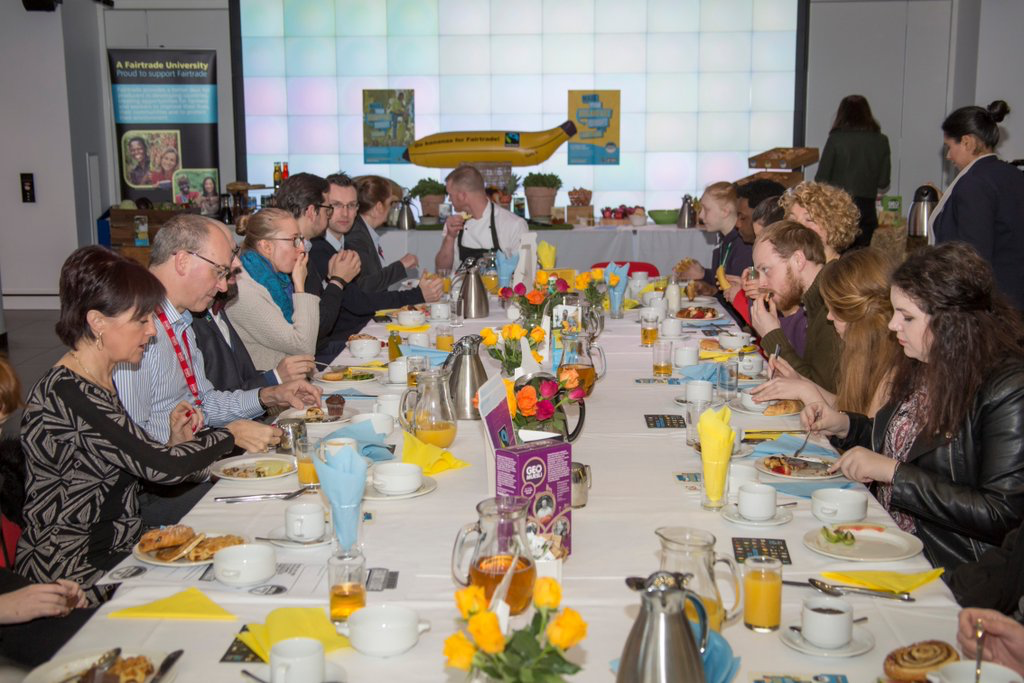 Check out more pictures of the event here and the film here.

The University is proud to be certified by the Fairtrade Foundation as a Fairtrade University. Part of this includes raising awareness of Fairtrade through events such as this but also, with the support of partners including Salfood, ensuring that we offer Fairtrade products on campus. If you would like to get involved in promoting Fairtrade or would like some more information/resources please just get in touch.

Wishing you all a great Easter break!