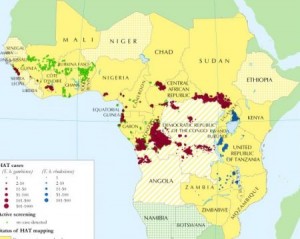 SCIENTISTS at the University of Salford are to artificially evolve a bacterium linked to the spread of deadly sleeping sickness, African Trypanosomiasis.

They aim to better understand the genomics of Sodalis glossinidius, a bacteria which, when present in the gut, allows the Tsetse fly to become a carrier of the parasitic disease.

Sleeping sickness causes around 10,000 human deaths each year and also kills cattle contributing to poverty and famine in regions of central Africa.

The scientists, led by Dr Ian Goodhead, a lecturer in infectious diseases in the School of Environment and Life Sciences, have been awarded nearly 100k by the Wellcome Trust to investigate how the genetic make-up of the bacteria influences the symbiotic relationship with insects.

Dr Goodhead, an early career researcher, earned the prestigious Wellcome Seed Award for the two-year study which he will conduct with colleagues at the University of Liverpool and Liverpool School of Tropical Medicine.

He said: “Genomes can tells us an awful lot about an organism and its relationship with health and disease.”

According to genomics, Sodalis should adaptively evolve in long-term culture, reducing and deleting redundant genes and pathways. By measuring the rate and nature of Sodalis gene loss over time, Ian and the team can better understand the genes and pathways involved in Trypanosomiasis spread and, therefore, allow for the future design of better control strategies for insect-vectored diseases.

Dean of School Professor Judith Smith said: “I congratulate Ian on gaining this prestigious start-up award. Salford has a strong tradition of research in infectious diseases and this fascinating new project adds to our portfolio and opens up new approaches to disease control.”

The School has recently invested £500K in a state-of-the-art genomics facility, which includes an Illumina MiSeq sequencer, Agilent Tapestation, fluorometers and a 64-core, 608GB RAM UNIX cluster devoted to the analyses of large datasets, and funding for a full-time technician dedicated to the support of genomics projects.

Find out more about the School of Environment & Life Sciences at Salford, which will soon be launching a postgraduate medical programme.