Why did the UK give China £3m to invest in football? 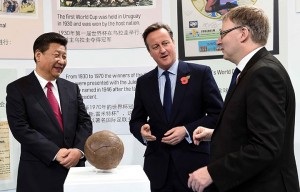 In September, ahead of a visit by the country’s president, Xi Jinping, the British government gave £3 million to China to help fund the development of its domestic football. At first glance, this seemed a remarkable gesture; after all, China’s economy is one of the world’s largest having grown at breakneck speed over the last two decades, while the performance of Britain’s economy has prompted a government-enforced austerity programme.

This programme has resulted in severe public spending cuts, which have had grave ramifications for sport across the country. At the same time, there is a perpetual cry for more investment in British football’s grassroots. Set in this context, the payment to China was questioned and condemned. The counter argument to such criticism is that David Cameron’s government is guilty of naïve tokenism.

Late in 2014, the Chinese government announced plans to build a domestic sport economy that will be worth $850 billion by 2025. As part of this vision, the country is keen to win the right to host football’s World Cup and, indeed, to win the competition. The problem is, China has no proven track record in football – hence the country’s current heavy investment in the sport. Overseas clubs are being acquired, coaching and playing talent are being imported, and an industrial infrastructure is being created.

So you could argue that a gift of just £3m is something of a missed opportunity on the UK’s part. Cameron’s supporters would argue that Britain is playing a long game and that such a modest award is one element in a broader diplomatic and soft power strategy. Indeed, United Kingdom Trade and Invest (UKTI) held an ‘invite only’ meeting in London in September, to cement footballing relations with China. Involving such luminaries as former England centre-forward Michael Owen, the meeting prepared the ground for President Xi’s trip to the UK.

Xi’s visit was notable because the president visited Manchester City, while Chinese player Sun Jihai was inducted into the National Football Museum’s Hall of Fame. There’s nothing new in this type of cosy relationship. Britain has been exerting its soft power influence on – and in – China through football for many years. The Premier Skills programme and The Pitch competition for students are two examples of this. As such, Britain’s £3 million payment needs to be set in this context: football is indeed more than a game – it is a matter of global politics and international influence.

Attending the UKTI event was Wang Jianlin, chairman of the Dalian Wanda property group, which recently purchased a 20% stake in Spain’s Atletico Madrid for $52m and Infront Sport and Media for $1.2 billion. Given Wang’s commitment to football (and sport in general) the industrialist clearly stands to gain from China’s ambitions. He will be acutely aware that, through a combination of spending big and publically supporting Xi Jinping, the financial windfall for his companies could be immense.

It was no surprise therefore that Wang sat next to Sepp Blatter when the FIFA President’s re-election was announced in May. Diplomacy and soft power are not exclusively the domain of politicians, either in national governments or in sports governing bodies. China’s corporate lieutenants have been mobilised in the country’s efforts to extend the reach of China’s influence while helping it achieve its sporting goals.

Sport takes centre-stage in international relations so often that, for some nations, it has become a means to several other ends. Consider the case of Formula 1 motor racing. Notwithstanding a multitude of diplomatic and soft power issues surrounding the sport’s long-time supremo Bernie Ecclestone, the challenges facing F1 have increased as it moves east.

When it was agreed that an annual race would be held in Bahrain, F1’s contract with the Bahraini government stipulated that only one other country in the region should be permitted to host a Grand Prix race. Later, Abu Dhabi agreed to host a race, a move entirely consistent with the nation’s emerging image as a luxury brand with close links to high-end automobiles.

But now Qatar has appeared on the scene, a nation fast developing a reputation for its voracious sporting appetite and persuasive soft power influence. Qatar is constructing a new city just outside Doha, called Lusail, to host football’s 2022 World Cup Final, and be branded as a ‘sports city’. Indeed, the 2015 World Handball Final was staged there and the Qataris are believed to want to stage an F1 race through the city’s streets.

Bahrain’s initial contract with F1 is a stumbling block for Qatar’s ambitions. Rumours have thus circulated that the gas and oil rich nation is working with American (and possibly Chinese) investors to acquire F1. As one commentator has wryly noted about the proposed move, “If you can’t get a table at a restaurant, then buy the restaurant”.

Qatar has been particularly adroit at utilising sport in pursuit of its wider strategic goals. Sport is a fundamental component of the country’s industrial vision and its national development plan. The country does not face the same budgetary pressures as Britain, something reflected in the influence Qatar now has across several sports. This is most potently symbolised by Qatar Sports Investments’ acquisition of Paris Saint Germain.

At one level, this was an inspired purchase by the Doha-based organisation, thought to be part of Qatar’s sovereign wealth fund. PSG is the only Ligue 1 club in Paris, and the potential branding and commercial benefits are obvious. However, as so many have observed so often, “Nobody got rich by running a football club”. Instead, Qatar’s ownership of PSG is believed to be driven by other motives.

Some people have noted the close links between PSG, one of the team’s biggest fans (former French president, Nicolas Sarkozy) and Qatari business. Yet such network engagement is not the extent of Qatar’s sporting diplomacy; its positioning of the 2022 World Cup as a regional event, its hosting of football’s Asian Cup in 2011 and its relationship with FC Barcelona (through the Qatar Airways sponsorship) are subtler ways the country can exert influence.

China, Britain and Qatar are far from alone in embracing the significance of sport in international relations. Russia and the 2014 Olympics in Sochi, the US through basketball – the list is endless. Yet, with sport now a global, high-stakes commercial game, the importance of sport diplomacy and exerting soft power has taken on new dimensions. So important that much of the most intriguing sporting action now occurs off the field, not on it.