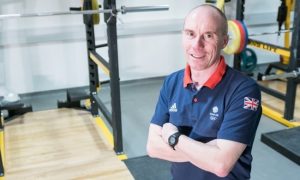 Congratulations to Dr Lee Herrington, who has been selected to work with Team GB in the 2016 Olympic Games in Brazil this summer.

Dr Lee Herrington, senior lecturer in Sports Rehabilitation for the School of Health Sciences, will be joining the Team’s physiotherapy department, where he will be responsible for the health and wellbeing of Britain’s athletes during the tournament.

Dr Herrington’s role, obtained via a three-stage application process with the British Olympic Association (BOA), also involves facilitating performance, and ensuring that each athlete is prepared both physically and mentally, when competing.

Dr Herrington will be jetting off to Rio de Janeiro a fortnight prior to the athletes, who arrive for the opening ceremony on Friday 5 August, in order to help prepare Team GB’s health set-up. As part of this preparation, Dr Herrington will be carrying out a variety of checks within the Olympic park to ensure athletes are given a full low-down of their surroundings upon arrival.

These checks, which aim to alleviate the athletes of unwarranted stress, include everything from the timings of the Olympic park shuttle busses, to the location of the nearest toilets in a particular building, and even Wi-Fi login details.

Dr Herrington had a similar role with Team GB at the London 2012 Summer Olympic Games and at the 2015 European Games in Baku, Azerbaijan.

This experience will be extremely useful to Dr Herrington as he starts to physically prepare for a summer of long hours in high temperatures. The threat of the Zika virus is also another challenge that Dr Herrington will have to contend with, due to its potential impact on performance of the athletes, and this will surely be on his radar.

Speaking about the amazing challenge that awaits him this summer, Lee said: “The Olympics is the craziest show on earth and I can’t wait to get started!

“It is a great privilege and honour to be able to play my part in the success of Team GB in Rio, and when I get to see our athletes on the podium collecting their medals, I will be immensely proud.”

Kay Hack, Dean for the School of Health Sciences, added: “We are extremely proud of Lee’s role within Team GB, it shows just how well he is respected within his field.

“This excellent industry link will see Lee return to the University in September brimming with anecdotes and real-life case studies which will truly benefit his students and their education at Salford.”

Watch a short video interview with Lee for That’s Manchester