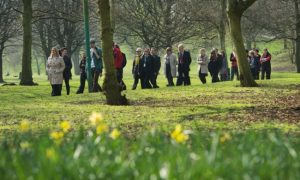 Green infrastructure (GI), a term used in reference to green and blue spaces (including areas of grass, woodland and parks, and rivers, canals and ponds) has already been shown to have direct and indirect influences on human health and wellbeing. However access to GI and the associated health and wellbeing benefits is not shared equally amongst the population. Additionally, as many people aged 65 and over become susceptible to environmental stressors (such as noise, pollution and extremes of weather), this age group in particular may also be the least likely to benefit from GI.

With that in mind, the ‘Green Infrastructure and the Health and Wellbeing Influences on an Ageing Population’ project, funded under the Valuing Nature Programme, an interdisciplinary research programme run by three research councils (ESRC, AHRC and NERC), will look into the relative benefits and stressors of GI and how GI should be valued in the context of the health and wellbeing of older people. The research will use a broad interpretation of health and wellbeing and will consider issues such as the influence of historical, heritage and wildlife value alongside the monetary value of preventing ill-health.

The project will involve collaboration with Greater Manchester health organisations that specialise in improving the health and wellbeing of older people and the design and management of GI across GM – a great example of both the health ICZ and engineering and environment ICZ. These organisations will include City of Trees, Public Health Manchester, Manchester City Council and Manchester Arts and Galleries Partnership.

Part of the project will involve older people as ‘co-producers’ of the research to better understand the thoughts, experiences and values that they associate with green and blue spaces.

Professor Penny Cook, The University of Salford’s lead on this, said: “Philip and I are really excited to have the opportunity to develop research in this important area. Salford’s contribution to the ‘GHIA’ project is to look for relationships between health outcomes, using hospital data, and the occurrence of green infrastructure across space. We will also work with our Salford Institute for Dementia to involve people with early-onset dementia to understand how they appreciate the urban landscape through different ‘sensory’ perceptions. Overall, the findings from GHIA will be used to develop online mapping tools that demonstrate the needs, provision and value of green infrastructure for older people. We will explore how findings from Greater Manchester will be applicable to other urban areas in the UK.”