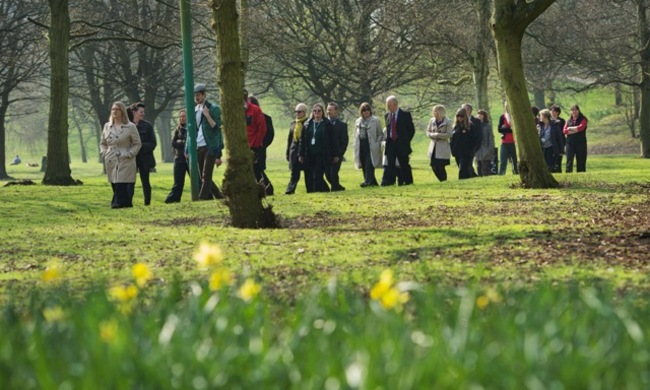 Green infrastructure (GI), a term used in reference to green and blue spaces (areas of grass, and canals or waterways), has direct and indirect influences on human health and wellbeing. However access to such health and wellbeing benefits isn’t shared equally amongst the population, particularly for those based in urban areas. Additionally with people aged 65 and over more susceptible to environmental stressors, this age group in particular may also be the least likely to benefit from GI.

The ‘Green Infrastructure and the Health and Wellbeing Influences on an Ageing Population’ project (GHIA), which has been funded under the Valuing Nature Programme by NERC, ESRC and AHRC, intends to look into the relative benefits and stressors of GI and how GI should be valued in the context of the health and wellbeing of older people. This value might include the monetary value of preventing ill-health but also broader interpretations, such as the historical, heritage or wildlife value which influences whether older people actively seek experiences in green and blue spaces

The project will involve collaboration with Greater Manchester health organisations that specialise in improving the health and wellbeing of older people and the design and management of GI across GM – an example of the health ICZ. These organisations will include GM’s Red Rose Forest, Public Health Manchester, Manchester City Council and Manchester Arts and Galleries Partnership.

Professor Penny Cook will be working with Professor Philip James from the School of Environment and Life Sciences on Salford’s contribution to the GHIA project. Salford’s role will be to look for relationships between health outcomes, using hospital data, and the occurrence of green infrastructure across space. Researchers will work with the Salford Institute for Dementia to involve people with early-onset dementia to understand how they appreciate the urban landscape through different sensory perceptions.