The ‘Fabulous Five’ would like to thank Dr Sarah Norgate for the nomination; as part of the nomination Sarah wrote “People make a research environment, and our early career researchers (ECRs) are our lifeblood”. We are grateful for her continued support, the support we receive within the Directorate and also from the School as we continue to develop as researchers.

Four of the ‘Fabulous Five’ picked up their award from Dr Jo Cresswell as part of the University Day celebrations on 8th June 2016. 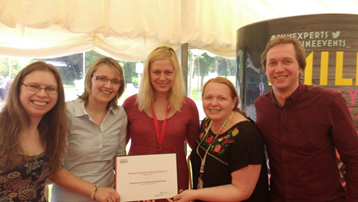 Dr Clare Allely, one of the Fabulous Five, could not attend because she was in Sweden on a research visit at the Gillberg Neuropsychiatry Centre at the University of Gothenburg.

As part of their research, the ‘Fabulous Five’ all work with external stak 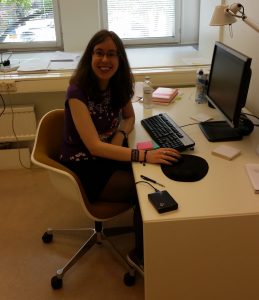 eholders/users in psychology, health and health-related areas. The aim of many of their projects is to be interdisciplinary, both within and outside the University. The short sections below aim to provide brief details about each of the five early career researchers:

Dr Clare Allely is an affiliate member of the Gillberg Neuropsychiatry Centre (GNC) at Gothenburg University in Sweden. She is currently collaborating with colleagues at the GNC on a number of papers and projects including one looking at cholesterol metabolism and steroid abnormalities of various kinds (cortisol, testosterone, oestrogen, vitamin D) in autism spectrum disorder (ASD) and another looking at immunology and ASD. She is also working on projects with colleagues in the UK looking at ASD in the criminal justice system. Specifically, one looking at the experience of individuals with ASD in the prison environment and another looking at the experience of defendants with ASD as well as how they are perceived by judges and juries (e.g., whether a diagnosis of ASD is considered to be a mitigating and aggravating factor in sentencing and to what extent an ASD diagnosis impacts on criminal responsibility, criminal intent, etc.).

Robert Bendall’s research initially focused on the interactions between the arousal system and the circadian system. This work investigated the impact of circadian and photic influences on the neuropeptide orexin and included research positions at the Department of Pharmacology, University of Cambridge and the Faculty of Life Sciences, University of Manchester. Recently Robert’s research has focussed on the cognitive sciences – both cognitive psychology and cognitive neuroscience. His main interests are how emotion influences aspects of cognition (e.g. visual attention) as well as the role of the prefrontal cortex during emotion-cognition interactions. Robert uses both neuroscientific and behavioural techniques in his research including the novel neuroimaging technique functional near-infrared spectroscopy. His recent research has been presented at the Annual International Conference on Cognitive and Behavioural Psychology and published in the journal Frontiers in Psychology. http://dx.doi.org/10.3389/fpsyg.2015.01592

Alex Clarke-Cornwell’s research interests include the measurement and quantification of sedentary behaviour, physical activity and workplace health using the activPAL™ and ActiGraph activity monitors; she is currently writing up her PhD. Alex’s research on the measurement of sedentary behaviour from accelerometers has recently been presented at international conferences in Limerick and Brisbane. She is also currently working with European colleagues as part of the consortium or the Determinants of Diet and Physical Activity Knowledge Hub, on sedentary time and physical activity surveillance in four European countries. Alex and Dr Anna Cooper (editor) have worked together on a book chapter around the impact of office design and activity in a book of blogs entitled Dialogues of Sustainable Urbanisation: Social science research and transitions to urban contexts (researchdirect.uws.edu.au/islandora/object/uws:30908). Alex has recently been awarded £17,607 from the University of Salford’s Research Capital Investment Fund, in order to purchase physical activity behaviour monitors for future research projects.

Dr Anna Cooper’s current research focuses on behaviour change in primary school children; the role of digital technology in research with primary school children; and NHS Health Checks in regards to the health check journey. The outputs from Anna’s PhD contributed to the outputs of the World Health Organisation (WHO) Collaborating Centre for Oral Health Research in Deprived Communities. In 2015 Anna helped to co-edit a Book of Blogs with Dr Jenna Condie (Dialogues of sustainable urbanisation: Social science research and transitions to urban contexts), which is now freely available as an e-book. Since joining the University Anna has been successful in a number of internal and external funding projects both as PI and CoA, presenting at conferences, and also the production of reports for external bodies and peer-reviewed journal articles. Anna was also returned in the 2013 REF as an Early Career member of staff. One of Anna’s current projects is around the development and testing of an Application (Digitising Children’s Data Collection (DCDC) for Health Project) designed to support the collection of data with children in a variety of settings and a collaborative research project with Liverpool John Moores University.

Dr Jo Meredith researches online communication and interaction, and is particularly interested in developing innovative methods for collecting and analysing online data. She uses methods such as conversation analysis and discursive psychology to analyse a range of online data. Since joining the University of Salford in April 2015, Jo has had a paper published in a peer-reviewed journal on the development of a transcription system for screen-capture data. She has also contributed chapters on the collection and analysis of online data to two prestigious qualitative methods textbooks. She is currently working with colleagues from radiography on the WoMMeN project. She is also collaborating with colleagues from the University of Manchester and Keele University on a number of projects and papers, including the analysis of psychotherapy using conversation analysis, the analysis of tweets around #dyingmatters and the analysis of police 999 calls. Jo is currently organising an international conference, with the media psychology team, on the micro-analysis of online data.