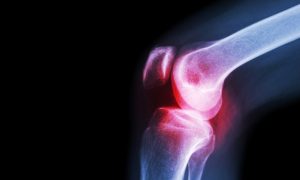 A knee joint with osteoarthritis

An educational approach aimed at reducing muscle tension and improving postural support has the potential to help millions of people suffering osteoarthritis in their knees, according to researchers.

Academics from our Centre for Health Science Research studied the effect of one-to-one lessons in the Alexander Technique on a group of 21 patients suffering knee pain caused by osteoarthritis.

The Alexander Technique teaches people to become more aware of their own habits – from slouching while standing to inappropriately tensing leg and back muscles while performing daily tasks – and lessons are aimed at improving movement coordination and reducing the muscular tension that has accumulated over a lifetime.

This pilot study, published in BMC Musculoskeletal Disorders, jointly carried out with the University of Manchester’s Human Pain Research Group based at Salford Royal Hospital and University College London’s Institute of Neurology, found the sessions led to a reduction in damaging knee muscle contractions.

Although Alexander Technique lessons are a well-known means of helping people with conditions such as back pain, this is the first time researchers have looked into whether this approach can have any effect on knee osteoarthritis.

The patients – aged from 40-70 and recruited from GPs across Greater Manchester – each attended 20 one to one lessons in the Technique over a period of 12 weeks and were encouraged to continue applying the skills they had learned as they went about their daily activities.

They were tested on a range of factors before and after the sessions, while the same tests were also carried out with a healthy control group of people who were the same age.

The researchers used electromyography (EMG) to measure the level of activation of the patients’ leg muscles before and after the sessions.

The results showed that their muscles had previously been over-contracting, making their legs stiff, and this was reduced following their Alexander Technique lessons.

This was significant as people with osteoarthritis often over-contract their knee muscles, possibly in response to pain, which can put too much pressure on knee joints and increase the likelihood of patients eventually needing a knee replacement.

Participants were asked to assess themselves using the Western Ontario and McMaster Universities Arthritis Index (WOMAC) scale – a standard questionnaire test which records pain and stiffness and is used to evaluate the disease severity of patients suffering from conditions such as arthritis.

The researchers found there was a 56 per cent reduction in the overall pain ‘score’ of those who had taken part in the Alexander Technique sessions.

The reduction in the amount of pain they were experiencing was also maintained when the patients were tested again, 15 months after these sessions finished.

Dr Steve Preece, Research Fellow and Deputy Director of the Centre for Health Sciences Research, said: “Although Alexander Technique lessons have been used successfully to help people with a range of problems, this is the first time anyone has studied their effectiveness in helping people with osteoarthritis – a condition which affects nearly nine million people in the UK and which will become much more prevalent as we have an ageing population.

“These sessions had a marked impact on the patients we looked at, even 15 months later, and this research could point the way towards a completely new approach for helping people with osteoarthritis.”

Stephen Preece is a co-author of the report along with colleague Richard Jones, together with Christopher Brown and Anthony Jones from the University of Manchester and Tim Cacciatore, affiliated to University College London.