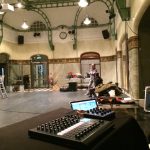 Salford doctoral candidate Manoli Moriaty is a composer and performer researching collaborative interdisciplinary arts. Last year he was supported by Arts Council Englad in working with Swedish dancer and choreographer Teresia Björk on Vi-We-Nous, a stage work based on the life of Swedish artists and activist Siri Derkert, which was performed in Beijing and Stockholm. He writes about his experience of working abroad.

_Teresia invited me to create and perform the score and sound design for her work Vi-We-Nous, the second piece of the trilogy Teresia had written based on the life of seminal Swedish artist and activist Siri Derkert. The performance schedule involved programming at the second edition of the Beijing New Dance Festival at the end of August, and further four at Stockholm’s Dansmuseet (Dance Museum) in mid-October.

The 45’ piece was developed at a series of rehearsals during August in Stockholm ahead of the trip to China. The collaborative process involved Teresia providing a conceptual narrative on which I was to respond through the sonic material composed on my laptop. The material were then compiled into an arrangement over which the choreography was written. One of the score’s most fascinating and yet challenging aspects was that while the arrangement allowed for improvisation during performance, it was arranged on a rigid timeline which required accuracy in initiating and manipulating specific sounds. Further to this, the final mix of the score needed to remain flexible as to accommodate the vastly different spaces and respective sound systems that it would be performed at. 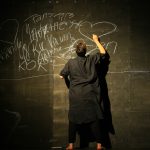 Vi-We-Nous was premiered at the 9 Theatre of the Chaoyang Cultural Centre in Beijing, with the festival including works by international dance companies such as Dansema Dance Theatre and Compagnie Marie Chouinard. The programme was adventurous and experimental, which was one of the aims of the festival as means of introducing local audiences to artistic creations that had little previous exposure in China. Our two performances were presented at the TNT Stage, with audiences of up to 300 people providing a warm reception and positive feedback after each showing. This sentiment was also reflected in the dance workshop we conducted ahead of the first performance, with participants responding enthusiastically to both Teresia’s guidance and the sounds I had prepared for the session.

The second round of performances were programmed by the Dansmuseet in Stockholm, with four showings scheduled for the second week of October. The stage was set at the museum lobby, a narrow space with high ceiling, which proved to be a substantial challenge in setting up the sound system in a way as to accurately reproduce the score. All four performances were well attended, with the space able to accommodate up to 40 people, with the second evening also including a discussion between the audience and the performers. The feedback was again particularly favourable for the work, even more due to the local audience’s familiarity with Siri Derkert and Teresia’s previous work in Sweden and abroad. This was reinforced by favourable reviews in two of Stockholm’s daily newspapers, Dagens Nyheter and Svenska Dagbladet.

Developing Vi-We-Nous was one of my most significant works to date, and I kindly thank Teresia Björk for providing me this opportunity. My participation was made possible through support from the Artists International Development Fund by Arts Council England. The AIDF scheme is aimed at supporting emerging artists in collaborating with international practitioners and organisations, and I am particularly grateful to the Arts Council’s team in providing me with excellent support and guidance in completing and managing the fund. I also extend warm gratitude for their support to Mathias Lafolie, cultural director of the Swedish Embassy in Beijing, Xi Zhao, founder of the Beijing New Dance Festival, and Erik Näslund, director of the Dansmuseet.

More details and video of Vi-We-Nous can be found at manolimoriaty.wordpress.com/vi-we-nous/