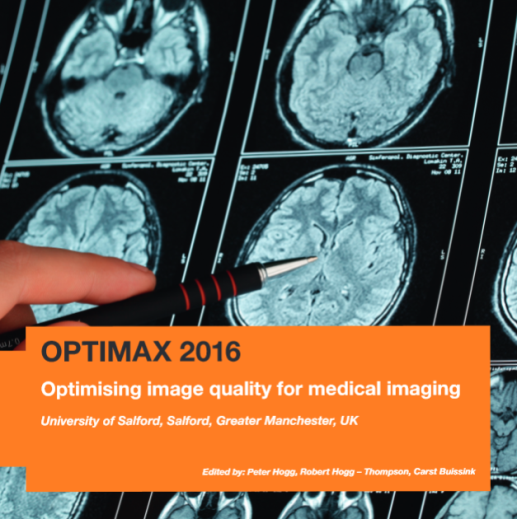 The OPTIMAX 2016 medical imaging research summer school was held at the University of Salford. This is the fourth rendition of the summer school, with others having been organized at the University of Salford (2013), ESTeSL, Lisbon (2014) and Hanze UAS, Groningen (2015). Each year we distribute the research outcomes either as journal papers or an open access ebook. The 2016 OPTIMAX ebook, edited by Hogg, P1, Thompson-Hogg2, R and Buissink3, was published online last week:

Previous editions of the ebooks are available as follows:

72 people participated in OPTIMAX 2016 from eleven countries and they comprised PhD, MSc and BSc students as well as tutors from seven European partner universities. Professional mix was drawn from engineering, medical physics / physics and radiography. OPTIMAX 2016 was partly funded by the partner universities and partly by the participants. Two students from South Africa and two from Brazil were invited by Hanze UAS (Groningen) and ESTeSL (Lisbon). One student A level from the United Kingdom was funded by the Nuffield Foundation.

The summer school included lectures and group projects in which experimental research was conducted in five teams. Each team project focus varied and included: optimization of full spine curvature radiography in paediatrics; ultrasound assessment of muscle thickness and muscle cross-sectional area: a reliability study; the Influence of Source-to-Image Distance on Effective Dose and Image Quality for Mobile Chest X-rays; Impact of the anode heel effect on image quality and effective dose for AP Pelvis: A pilot study; and the impact of pitch values on Image Quality and radiation dose in an abdominal adult phantom using CT.