Back  in  1965,  Ivan  Sutherland  proposed  his  vision  of  the  Ultimate  Display .  Such  display  would  create  virtual objects  that  were  totally  undistinguishable  from  their  real  counterparts  (“the handcuffs  displayed  […]  would  be confining,  and  a  bullet  […]  would  be  fatal”).  This  vision  was  the  seed  for  research  in  the  fields  of  3D  displays, Virtual  Reality  (VR)  and  Augmented  Reality  (AR).  Recent  market  analyses  foresee  a  bright future  for  these technologies, with companies like Samsung or Sony competing for a dominating position on this rising market.

This  comes  after  years  of  improvement  in  most  technical  aspects  of  VR.  3D  sensing  of  user’s  movements  and interactions no longer require data-gloves or sensors (e.g. Kinect, Leap), and solutions have been proposed to produce  mid-air  tactile  feedback  on  the  user’s  bare  hands.  Although  similar  advances  (i.e.  costs,  quality)  have occurred for Head Mounted Devices (HMDs), they still cover user’s faces encumbering  other  daily  tasks  (e.g.  office  work) and preventing eye-contact and social interaction with  other  people  (e.g.  co-workers). Actually,  social  and  aesthetic  factors  are considered the major risks to the eventual user’s acceptance and success of VR technology. This enforced isolation also contrasts with the emerging concept of the Internet of Things (IoT). While this concept aims to create an inter-connected world where technology seamlessly pledges and anticipates our needs, VR remains stuck in the same formats proposed 50 years ago.

In this talk Dr Diego Martinez Plasencia summarize his efforts during the last years to come up with formats for non intrusive VR.  He describe several systems created to support 3D interaction and collaboration in contexts of use where traditional VR formats fail to apply (e.g. face to face interaction, meetings, mobile contexts) and described the potential of non-solid diffuser displays to achieve this vision. 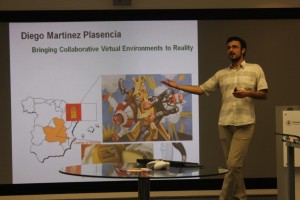 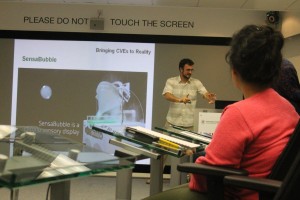 Mark Hillson recently visited THINKlab and has written a great article about us for the ‘On the Platform’ website.  Take a look at what he had to say Inside the THINKlab 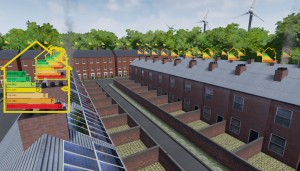