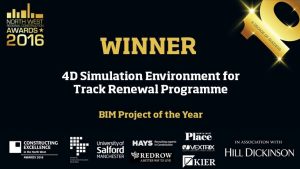 L technology from the University of Salford is proving a game-changer for the planning of Britain’s rail network upgrades – and a prize-winner!

Network Rail has signed a new contract with the University to roll the technology out across the country after successful series of trials.

The revolutionary 4-D simulation developed with S&C South Alliance, has received a host of plaudits including winning BIM Project of the Year at the North West Regional Construction Awards, held on the 30th June 2016.

The Director of THINKlab at the University of Salford, Professor Terrence Fernando said: “We are thrilled that our long-term contribution to Network Rail’s work is now having a real impact on the business at a national level.

“The company are describing the new package as a ‘game-changer’ in rail network planning which really shows the power of digital technology in engineering.”

The inability to effectively schedule works on complex sites was a major factor in projects overrunning. THINKlab technologists helped Network Rail create 4-D simulations, meaning the tool can be is used for visualising and scheduling of tasks to the minute over a time period, allowing them to run different scenarios for pre-work briefings and post-work evaluation. 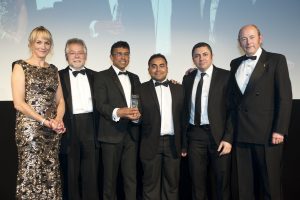 “I have been planning track renewals for 17 years and this has blown me away,” says Stephen Kearney a site manager for Network Rail. “It’s suitable for small planning schemes as well as major programmes over a number of years.”

Nathan Lord, site manager at S&C South Alliance said the possibilities of the package were “unbelievable” and it gave them the confidence to know their planning for deliver more efficiency at lower cost. Head of Transformation at S&C South Alliance Steve Naybour said “this is a 4D planning package for now that will take us into the future of delivering more”

Project of the Year

Judges at the North West Regional Construction Awards said of the winning project:

“The challenge was clear and unambiguous. The inability to effectively schedule works on complex sites was a major factor in projects overrunning. The development of 4D BIM had not yet been adopted by the rail industry due to the difficulty of using the tools. This innovation uses advancements in gaming technology to bridge the knowledge gap and provide a visualisation system that is easy for multiple stakeholders to understand and has led to dramatic improvements in the ream performance.”

THINKlab will now be put forward to the Constructing Excellence National Final, which will take place later in the year.

See how the package works in this company video.