Home / Confessions of an Aspergic Professor

Confessions of an Aspergic Professor 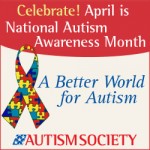 “Computers were made by and for people with Asperger’s Syndrome,” goes the joke – but one with a grain of truth. “Academic life suits Aspies” goes another – but is it still true?

I was diagnosed with Asperger’s Syndrome in 2003, though I had it most of his life, unknown. On discovering this, my wife, Ruth, and I began to understand many of the difficulties I had had. Especially in the academic life of today.

The purpose of this post, is to help us understand when academics exhibit Asperger’s Syndrome (A.S.). We usually see A.S. as a disability, but can also view it as a gift. It can be especially helpful when innovation is needed in academic or business life, but is often misunderstood.

I am Professor of Human Factors and Philosophy in Information Systems – a rather long title that perhaps speaks of my aspergic attention to wide-ranging detail, of which more below. I teach on a number of programmes including Business Information Technology and supervise a number of MSc and PhD students.

Asperger syndrome is a form of autism, which is a lifelong disability that affects how a person makes sense of the world, processes information and relates to other people, this short animation from the National Autism Society outlines some of the generic points:

Asperger’s Syndrome is difficult to describe, so instead I penned the following verses to try to capture something of my experience of it, from the ‘inside’:

We seek truth, not sham;
Reality, not opinion.
We say it like it is,
With no hidden agendas.
We’re not imprisoned in what others think.

We like the best, the right,
Valuing every detail.
We’re direct; single-minded,
Focusing intensely,
We seek the optimum in each thing we do.

We think in different ways;
We try the unusual.
We work new things out
To their logical end –
Bequesting new ways of understanding things.

We are loyal, not scheming;
We eschew selfish gain.
We keep at it to the end,
We like to please everyone,
Disillusioned if we let anything down.

We see meaning in all.
We empathise ‘the other’ –
Animals, objects, habits,
People, young and old –
We dignify all who’re overlooked by the crowd.

Sensitive to nuances
That others don’t see,
We attend to the small
And link things differently.
We are artists – our medium is life itself.

These characteristics work themselves out in academic life quite pervasively, for both good and ill, as challenges when interacting with people, but as a gift when teaching and generating new ideas for research.

Some Challenges Facing an Aspergic Academic

It is well known that ‘aspies’ like me have difficulty in understanding nonverbal cues of others. Referring to my operation in company, Prof. Digby Tantam (University of Sheffield), who diagnosed me in 2003, told my wife, ‘What you and I do naturally, he has to work out every time.’

When with people who require something of me, or who might criticise me, I spend up to 70% of my brain power trying to work out what they expect of me, leaving only 30% for the content of the conversation. However, when I am relaxed with people I can devote 100% to the conversation, and often give good value because of my holistic thinking.

I cannot easily comprehend or understand what is ‘expected’ of me. When writing papers, funding bids or even contributions to university or departmental strategy, I find it difficult to ‘read between the lines’ of the rules, to grasp the real requirements that are often unspoken yet make a submission acceptable. So my rejection rate is high.

Whereas most people ‘know’ which aspects seem important in a situation, I don’t. Aspies tend to long-windedly verbalise a plethora of issues, because all seem equally relevant. It takes me longer than most to work out what to omit, and how to express it. This is exacerbated, when writing papers, by the fact that I am writing new ideas that need extra explanation (see below).

While most people ignore ‘elephants in rooms‘, I give voice to them – much to people’s annoyance! I have been known to ‘blow up’ in meetings, when this inability to see what ‘should’ be omitted is coupled with my feeling that some hidden agenda is being stubbornly adhered to that is detrimental. My intensity of delivery, an inability to express myself well, and mild Tourette’s Syndrome, do not help either!

So, I feel my interaction with colleagues and contribution to university discourse is a disaster zone. Twice I asked the HR department for assertiveness training, but they fobbed me off with other things that did not fit my needs – possibly because I wasn’t assertive enough to demand it! So I gave up, and just work ‘underground’, doing what I believe to be right and beneficial rather than flavour-of-the-month.

However, I also see Asperger’s Syndrome as a gift, which brings considerable benefit especially in academic work itself.

The Gift that is Asperger

We ‘Aspies’ see things differently, eschewing the usual assumptions. We dislike and avoid ‘fashionable’ or narrow thinking – and this characterizes much academia because of the desire to be accepted for publication or funding. Instead we want reality and truth, not hidden agendas or assumptions, and so want to bring all relevant issues into the picture. We see and talk about ‘elephants in the room’ that most people ignore.

As a result, Aspies who are academically-trained might work up new ways of seeing things into new ‘paradigms’ in their fields. I have tried to contribute new ways of seeing in several fields, including the following (the mention of ‘Dooyeweerd’ is explained below):

What most helped me develop new these new ways of seeing things was discovery of a philosophy of everyday life that gives a handle on diversity, the philosophy of Dooyeweerd. Dooyeweerd was a radically different philosopher of everyday life, who suggested that we should place meaningfulness rather than being, process or reason at the heart of created reality, and this is proving very fruitful in many fields. (Might Dooyeweerd himself have had Asperger’s Syndrome, undiagnosed?) He came up with a suite of ‘aspects’ that helps us understand and analyse everyday experience in all its richness.

Because Dooyeweerd was relatively unknown, especially in the IS community, I began in 1997 to build a website that explores his ideas – The Dooyeweerd Pages. Was it perhaps the Aspergic quality of perseverance that kept me going, so many scholars worldwide find The Dooyeweerd Pages helpful? Or was it that I knew, deep down, it was a worthwhile thing to do – something that Aspies seek after?

Aspies spouting new ideas get shunned, our papers and funding bids get rejected, as mentioned above. What has helped me cope with the rejection syndrome that results? Many Aspies are bolstered by a feeling that they are ‘special’, but this can become rather self-centred or arrogant. Instead, I think that what helped me most was my radical commitment to Jesus Christ, and the help that He gives me. This is partly explained in a personal page on Asperger and in my spiritual journey.

Because of an Aspie indifference to fashionability, my teaching has veered away from just providing the latest theories, and has instead tended towards helping students understand the ‘key’ or foundational issues of the field. The most successful module was Key Issues in Information Systems Development, which was presented to ten cohorts of students from across the world. It was perhaps Asperger that gave me the boldness to teach Dooyeweerd’s aspects to Masters students – and then to undergraduates.

Students loved this – its philosophical roots, its everyday slant, its holistic coverage of issues, and perhaps especially its affirmation of the faith aspect of IS alongside the economic and technical. What has been systematically downplayed by Western academia for decades goes down well with Muslims, Hindus and African Christians today. As two students put it,

“I believe the most important concept that I have learned during this module is aspects, which would remain with me all my life whether in professional or personal life. This is because it has broadened the scope of thinking process of my mind and is helping me in making any decision taking in consideration all the possible contexts and their interrelationships.” – P.S. 2010

“This module has served has an eye opener for me such that, I now understand what an information system is, the activities involved in its development and the main things to consider while developing an information system. I consider it a priviledge to be a part of this module and I will like to appreciate the management of the Salford Business School for making this module a core course for the MST/MIT students.” – O.A. 2009 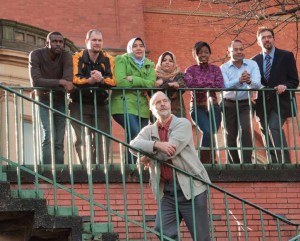 Professor Andrew Basden and his students

We ‘Aspies’ can also be more adept than most at relating across diverse cultures. We haven’t internalised a whole set of conventions or assumptions from our own society, which make people from other cultures feel uncomfortable, unimportant or pressured. I tend to mention issues that others ignore or find embarrassing – ‘elephants in the room‘ – in a way that is non-threatening. The open-minded find that liberating.

I’m glad I have Asperger’s Syndrome, because it has helped me bring good to the world that otherwise would not have happened.

What You Can Do

Those with Asperger’s Syndrome have the new ideas and the courage and perseverance to see them through. Without Aspies, universities might become just boring teaching-providers and jobbing research shops. (Am I too blunt?) May I suggest some things you can do:

Basden A (2002) “A philosophical underpinning for I.S. Development” pp. 68-78 in Wrycza S (ed.) Proceedings of the Xth European Conference on Information Systems, ECIS2002: Information Systems and the Future of the Digital Economy. University of Gdansk, Poland, 5-10 June 2002. (For this paper, see http://aisel.aisnet.org/ecis2002/24.)

Basden A. (2011). Enabling a Kleinian integration of interpretivist and critical-social IS research: The contribution of Dooyeweerd’s philosophy. European Journal of Information Systems. 20, 477-489.

Basden A, Burke M. (2004) “Towards a philosophical understanding of documentation – a Dooyeweerdian framework”, Journal of Documentation, 60(4):352-70.

3 thoughts on “Confessions of an Aspergic Professor”