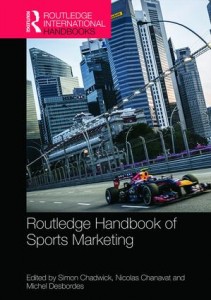 The global sport industry is now estimated by the United Nations to account for approximately 3% of global economic activity. A recent report by PWC (2011) alternatively indicates that the market for sport will be worth $145 billion by 2015, with North America accounting for 45% of global revenues, EMEA for 35%, Asia Pacific for 19% and Latin America for 5%. In the United States, Plunkett Research (2014) believes the total size of American sports industry is currently $485 billion. Sport is consequently seen as being big business by many people, including academic researchers. At the same time, sport continues to fulfil an important socio-cultural role across the world, providing the focus for communities, health initiatives, and so forth. There can be no doubt: sport is central to the lives and activities of innumerable people and organisations, whether they be fans in a stadium, runners taking part in a charity race, sponsors named on the side of a racing car, or local people benefitting from a sport club’s community engagement programmes.

As the 20th century progressed and the North American model of sport developed (a model founded on providing good customer service, linked to funding through private means such as sale of television and sponsorship rights), so sport marketing began to emerge as an important vehicle through which organisational goals could be simultaneously achieved. For sports such as the NBA, NFL, NHL and NASCAR, marketing developed as a basis for building a sustainable fan base, selling merchandise, securing television coverage and generating revenues. These sports set a precedent, which was subsequently followed by the likes of the International Olympic Committee which has created structured marketing programmes which in turn have been duplicated by the likes of FIFA, the PGA and the tennis Grand Slams.

This Handbook of Sport Marketing is presented as a showcase for the latest thinking in the field, as a bold statement of confidence among the researchers working in sport marketing, and as a stimulus and motivating force for further research in the future. The Handbook therefore brings together leading thinkers, researchers and writers in sport marketing who address some of the most pressing issues for contemporary sport. Some of the issues will already be familiar to readers, some may not be; furthermore, the foci of these papers are often commercial, but not always so as some papers address the socio-cultural context within which the marketing of sport is located.