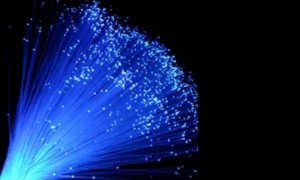 Scientists have opened a door to faster, cheaper telecommunications after proving a new link between silicon chips and ‘rare-earth’ metals used in internet signalling.

Silicon is the ‘gold standard’ semiconductor at the heart of the computer industry but lacks the ability to produce, detect and amplify the light signals that are sent down optical fibre. For the amplification of these light signals, we rely on rare-earth elements, which were thought to not interact optically with silicon.

However physicists at Salford and the University of Surrey have made a novel discovery by showing for the first time, that light can be generated by an electron ‘jumping’ directly between silicon and rare-earths.

“The electronic data in silicon chips needs to be converted into light to send down optical fibre, then back to electronic data, by separate devices. If the conversion between electronic and light signals can happen on a silicon chip, it would streamline the way data travels around the world,” explains Dr Mark Hughes, lecturer in physics at Salford.

“It’s the Channel Tunnel factor. Instead of having to change from a train to the ferry and then back to the train, you would have one single train journey. It would be a major step forward.”

Rare-earths usually give off light at very specific colours or ‘wavelengths’, and silicon doesn’t usually give off any light at all. However, the physicists implanted the rare-earth elements cerium, europium and ytterbium into silicon and found that not only did it give off light, but the wavelengths emitted by the rare-earths had been shifted to those that can be used in optical fibre. The shift in wavelength showed that there must have been a jump or ‘transition’ of an electron from silicon to the other elements.

Added Dr Hughes: “In short, we have already made the first step in demonstrating the conversion between electronic and light signals that could create the future silicon chip.”