THINKlab have developed a virtual reality experience that allows users to ‘visit’ Chernobyl to see and learn about the animals who live in the radioactive ‘exclusion zone’ in Ukraine and Belarus.

‘Virtual Chernobyl’ helps communicate findings from an ongoing programme of research on the wildlife of Chernobyl, which is being led by Dr Mike Wood from the University of Salford.

Chernobyl has been a no-go area since the nuclear disaster nearly 30 years ago yet many animals from bears and wolves, to elk and wild boar have made it their home and a recent study suggests that large mammal populations in the Zone have increased significantly since the accident.

Dr Wood, Prof Nick Beresford (NERC-CEH) and Prof Andy Miah (Salford) secured funding from the Natural Environment Research Council (NERC) and the University of Salford for an exciting project that capitalises on the University of Salford’s scientific, technical and communication expertise. This public engagement project, “Alienated Life? The Chernobyl Exclusion Zone, 30 Years on”, makes the Chernobyl wildlife research accessible to everyone and ‘Virtual Chernobyl’ is a core component of that engagement activity.

“Advances in photographic and acoustic recording techniques mean we are now able to estimate the number of animals by observing them directly rather than looking at their tracks. We have embarked on a project using motion-activated cameras and sound recorders to investigate wildlife in different areas of the exclusion zone and evaluate the influence of radiation on animal populations.  Through ‘Virtual Chernobyl’ people are able to get a real sense of the truly unique Chernobyl environment, from which people have been excluded for nearly 30 years.” Dr. Mike Wood

The Chernobyl wildlife research has been featured on the BBC and Channel 4 News, with ‘Virtual Chernobyl’ being showcased at the Manchester Science Festival, Museum of Science & Industry, various scientific meetings and at the International Atomic Energy Agency (IAEA) in Vienna.  ‘Virtual Chernobyl’ has also been used to support research-led undergraduate and postgraduate teaching at Salford.

Watch a video of the interface here 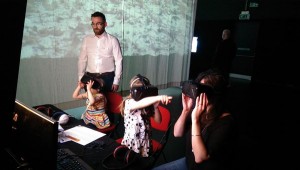 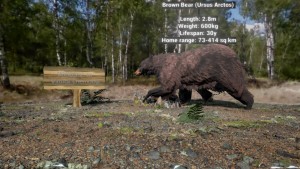 A Brown Bear in Virtual Chernobyl 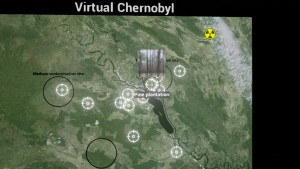