Introducing Kat, one of our Undergraduate Research Assistants

ear Psychology and Counselling student at the University of Salford.

I’m the middle child of five, when I was growing up my mum was a childminder and I loved helping her with the children she looked after. I have always wanted to work with children and once I finished high school I went to college to complete a diploma in childcare and education.  After college I worked as a qualified early years educator for 13 years, working with children under the age of 5. While working in nurseries I took on different roles, first senior, then Every Child a Talker (ECAT) champion, and finally Special Educational Needs Co-ordinator (SENCO).

During my ECAT training I heard about ‘The 30-million-word gap’ a difference in the words spoken by children from the wealthiest and poorest families by the age of three. “Simply in words heard, the average child on welfare was having half as much experience per hour (616 words per hour) as the average working-class child (1,251 words per hour) and less than one-third that of the average child in a professional family (2,153 words per hour)” (Hart & Risley, 2003, p.8). This caught my attention and made me want to find new ways of helping children to learn. This, as well as my love for helping children with special educational needs, made me decide that I would need to further my education at university.

Becoming a Research Assistant working with Dr Gemma Taylor was very exciting for me, especially knowing the first study I’ll be working on with her is investigating ‘The role of digital reinforcement’. The ages that children are using different types of media are getting younger. The Early Years Foundation Stage (EYFS) even states that children should know that information can be retrieved from computers by 30-50 months. I find this so interesting and often wonder how it will impact on their overall development.

As a Research Assistant I will be working closely with parents, nurseries, and children helping collect data and coding it.

Introducing Eve, one of our Undergraduate Research Assistants 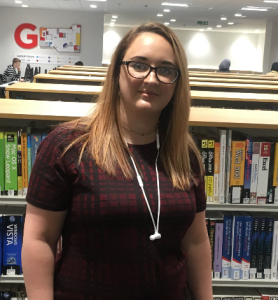 I’m Eve and I am a research assistant for Dr Gemma Taylor in the Salford Cognitive Development Lab. I am a 2nd year Undergraduate full honours Psychology student at the University of Salford and a mother of four children aged 4, 6, 9 & 11 years.

In my role as a Research Assistant in the Salford Cognitive Development Lab, I have a range of responsibilities. I work with Dr Taylor to develop the videos and toys that we use in our studies. I also communicate with parents and nurseries to explain our studies and run the studies with young children. We always make sure that everyone enjoys taking part in the studies. I am fascinated by the current research in the lab examining the role of digital media on children’s development.

As a mature student, I have worked with children for many years across my career and have previously undertaken a Foundation degree in children’s learning and development. It was from this work with children that my interest in Developmental Psychology was sparked. It fascinates me why children do things, how they learn the skills they have so quickly and how they interact with the world around them. One of my areas of interest specifically is how children are developing in this ever-changing world of digital technology. Modern children have more access to the digital world than ever before. Although children’s digital media use is often portrayed negatively in the media, there may be a multitude of benefits that we have yet to discover. This is where my role within the Cognitive Development Lab begins to align with my interest in children’s development. My experience as an undergraduate research assistant so far has already given me a great insight into what my career could be if I continue to aim down the path of a Developmental Psychology Researcher.

Dr Gemma Taylor, Lecturer in Psychology in the School of Health Sciences has scooped a prestigious early career researcher award from the Economic Social and Research Council (ESRC).

The New Investigator Grant which is set to be around £234,000 was awarded to Gemma for her project “Investigating the educational potential of touchscreen apps for children’s early vocabulary acquisition.” New Investigator Grants form one element of the ESRC’s support for early career researchers and the scheme is specifically aimed at supporting those looking to make the transition to an independent researcher through managing their first major research project. Gemma will be working with Dr Sarah Norgate (Mentor) and Professor Padraic Monaghan (CI at the University of Lancaster).

Gemma has worked at the University for just over the year and has already received internal recognition, receiving a Vice-Chancellor’s Early Career Research Scholarship August 2017-2018 for research around “Children’s selective imitation of desirable and undesirable actions: The role of digital reinforcement”.

In the main, her research looks at understanding the impact of digital media on children’s cognitive development. A dedicated website will be set up for the project.

This article was originally posted on University of Salford Internal Communications

WATCHING television or playing with smart phone apps does not have any effect on children’s language development – providing they still spend time reading – researchers have found.

A study led by University of Salford developmental psychologist Dr Gemma Taylor and published in the Journal Of Children And Media, has found that as long as parents or carers spend time reading with young children, and this time is not reduced in place of television or touchscreen devices such as iPads, children’s exposure to this media should have no effect on the size of their vocabulary.

A team of researchers from the University of Salford and the ESRC International Centre for Language and Cognitive Development at Lancaster University used online questionnaires to get data from 131 parents of children aged 6-36 months.

The parents were asked a series of questions about the amount of time their children typically spend watching TV, using devices such as smart phones or tablets, or either reading or having stories read to them.

They were also asked to complete the UK Communicative Development Inventory (CDI) – a detailed checklist of words from different categories such as animals, household items and food and drink – which their children were able to say and understand.

Of the families surveyed, 99 per cent of children were read to daily, 82 per cent watched television and 49 per cent used mobile touchscreen devices daily.

The researchers found a positive relationship between the amount of time children spent reading or being read to and their vocabulary size, but time spent watching television or using mobile devices had no relationship – as this reading time was not offset by time in front of screens.

Dr Taylor said: “Children are now growing up in a digital age surrounded by a wide range of media, and scrolling across the screen of a tablet is as natural for a three-year-old as flicking through a picture book.

“Mobile touchscreen use among children is also increasing, and there is some concern that this is taking the place of time spent between children and parents which is crucial to language development.

“Our findings showed that, in the sample we looked at, the children’s vocabulary size was not affected by time in front of mobile devices, as the parents were still spending time reading with them.

“However, it’s important to note that the sample we looked at was made up of highly educated families, and in order to study this issue more broadly we would need to look at a much larger group of parents.”

This article was originally posted on University of Salford News

Children are growing up in an increasingly digital age, surrounded by digital media in the home, nursery and at school. We are interested in investigating the role of digital media on children’s cognitive development.

We run our studies at our lab in the Allerton building at the University of Salford and at local nurseries.

For more information about our lab please see our website