Ad Blocking Should Be Banned 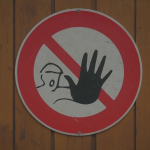 Ok, so ‘Ad blocking should be banned’, maybe a little overdramatic, but Internet adverts are the primary source of revenue for most of the websites. The majority of sites are free to browse which is thanks to the advertisements displayed on the web pages. This model of the internet has been steady over the last two decades. As time goes by, ad companies have become more and more aggressive in their approach, and this has led to the use of ad-blocking software rising dramatically.

At the present time, if you open a web page, you are to likely to see many ads based on your browsing history, cookies and other private information. More annoyingly, many ads are merely deceiving, forcing the users to click on them to view the original content. No one will disagree that the digital ad business has now reached a point where the users find the ads an annoyance rather than useful.

This atmosphere has given birth to ad blockers. You just install software or a browser plug-in to block the ads from being displayed. This prevents the ads from displaying and also prevents hefty ads from eating up bandwidth and lets pages load faster. Ad blockers are gaining more and more popularity. From old players like ‘AdBlock Plus’ to Opera’s new, free built-in blocker. The rise of ad blockers is threatening the economic model that the internet is based on. For these reasons maybe ad blocking should be banned.

The Recent Rise of Ad Blocking

According to several reports from internet research organisations, ad blockers are on the rise. An IAB UK report, published March 2016, shows approximately 22% of web users (UK) use ad blockers, up 4% since October 2015. A staggering rise, making it alarming for digital marketers.

Sites will no longer be able to support themselves through this valuable income stream due to the increased use of ad blockers. More significant sites will move to a subscription-based model, while smaller sites may disappear entirely. The growing popularity of ad blockers is actually threatening the diversity of the internet. 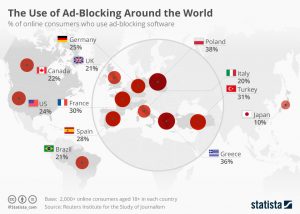 High profile individuals such as Edward Snowden, continue to encourage internet users to install ad blockers, albeit for security reasons. As a result, this trend is likely to continue.

Reasons behind the increasing popularity of Ad blockers

Digital marketers have neglected the issue of poor user experience (UX) for too long, adding to a long list of digital marketing sins. This has almost encouraged the use and development of ad-blocking plugins and software. We can summarise the key reasons behind the popularity of ad blockers as:

On the surface, ad blocking seems a good thing for the end-users, but in the long run, they will disrupt the open atmosphere of the internet. Closing of the main stream of revenue for sites will lead to some closing, which in turn could lead to the internet becoming a more closed place controlled by a few large companies.

Internet users no longer welcome methods deployed by digital marketers. No one objects to small, relevant and unobtrusive adverts on a page. Massive multimedia enriched ads that damage the usability of a site must stop. 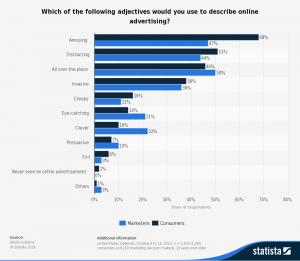 How digital ads are viewed by internet users, courtesy of Statista

To reverse this trend

Key steps to stop the increasing use of ad blockers:

Here is the summary of the IAB UK report: 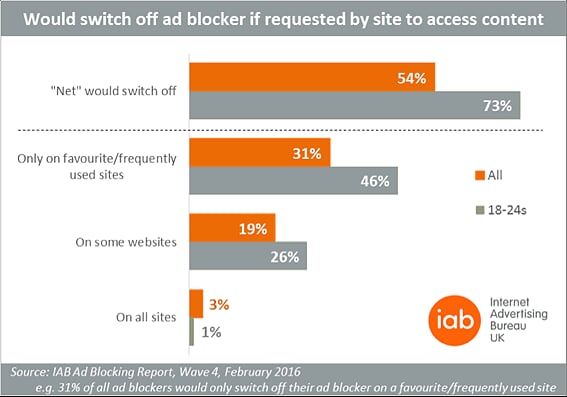 Most people would switch off ad blocking if access to a site required them to do so, courtesy of IAB UK.

There is a fine line between generating income and not alienating web users. Should adblocking be banned? I’d love to hear your thoughts. Leave me a comment or tweet me @marc_creighton or contact me via marccreighton.co.uk